The Path of Anger by Anthony Rouaud was a book that caught my attention a few months ago. There are a number of book blogs that I follow so that I can hear about new books, and this one was coming up on all of them. It was originally written and already released in France and was being translated into English. None of the blogs had any actual reviews up, but they all seemed to be saying the same thing: this is a book that's getting a lot of hype. The bits that were made available online were enough to intrigue me, so I was pretty eager to get my hands on it.

So was the hype accurate?


The Good: One Heck Of A Start

When I got about halfway through the book and reached "Part Two", I was already considering this book to be one of the better new series out there. 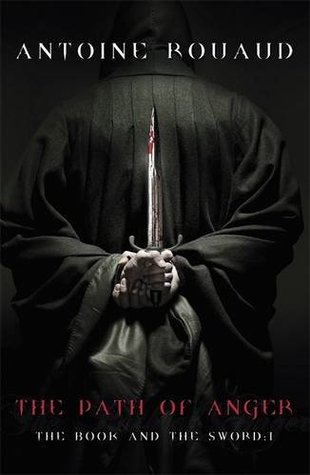 The back story for this book has a great empire toppled by a revolution of the people, and in its place a Republic was established. A young scholar, Viola, is on a special but unmentioned mission, and arrives in a port city at the edge of the known world. She finds a drunk old soldier who was rumoured to have boasted that he had hidden the famous sword of the emperor not long after the fall of the empire. The sword is supposed to be an ancient relic from before the time of the empire, and Viola wants to find it to preserve its history. She soon discovers that the former soldier, Dun, is in fact Dun-Cadal—the greatest general from the old empire.

While trying to convince Dun-Cadal to give lead her to the sword, Viola also tries to learn his perspective of the empire's collapse. He comes to tell her about the first battles in the rebellion before it turned into a full-scale revolution. More specifically, he tells the tale of Frog, his student who he says was the greatest knight in the world. He goes on to tell of Frog's origins, their time training together, the tragedies of the final days of the empire, and how Dun-Cadal went into hiding with the fabled sword.

The world in which this book is set, the battles fought during the revolution, the politics and factions that were tearing the empire apart, and the main players that fought to control the course of history were fantastically interesting. In fact, the mixture of large scale warfare, revolutions and compelling characters reminded me a lot of The Thousand Names by Django Wexler or The Promise of Blood by Brian McClellan. Yet it offered enough unique writing to set it apart from them.


The Bad: A Whole New Direction

The start of Part Two seemed to hold the same promise and compelling writing that was prevalent through Part One. It involved getting a new perspective on the fall of the empire: Frog's. He seemed such an interesting character in the first part, and it meant delving deeper into all those things I mentioned above that made it so good.

In truth, the parts of Frog's perspective of the war that led to the empire's collapse were still interesting. In fact, it was the only interesting part of the last half of the book. The rest of the time, Rouaud began working in what will be the main plot arc for the rest of the series. In this book, it involves Viola and Dun-Cadal, among others, having to prevent the Republic from being taken over by the same scheming nobles that helped facilitate the collapse of their own empire. Where the back story that the first half of the book touched on was in depth and compelling, the contemporary story line was clichéd and boring. After a while I realized that I only seemed to like the back story of this book, involving the fall of the empire. Everything else failed to keep me captivated.

On top of which, new characters were introduced or were given more prominence than they were before, but none of them wound up being interesting at all. In fact, some of them proved to be whiny and annoying. They simply failed to be as interesting and compelling as Dun-Cadal, who was no longer the only major character in the book. Coupled with the new plot lines, the second half of the book faded the further I read, all the way to the end.

The Conclusion: A Lot Of Potential Turned Into A Mess

The only times I felt compelled by the book was when it delved into the past, with the revolutionary war and the fall of the empire. The worrying part is that if the second half of this book is any indication, the back story is finished. Everything to come in future books will involve the plot arc from the second half of this one. Considering how poor that plot line was, I'm not very optimistic that it'll be much better in any further books. My one hope is that Anthony Rouaud proved with the first half that he is very capable of writing an interesting world, with good characters and a compelling plot, so perhaps he can recapture that magic.

As a side story, a friend of mine was leaving on a holiday vacation to Cuba and wanted a new book to read. At that point we had both known about this book, and I had read most of the first half that I've said I loved. So I recommend it, and he took my advice and bought it. A couple of days later I get a message from him, coming from Cuba, with this one sentence that rather accurately summarizes the entire book:

"What started out as a decent book with a lot of potential turned into a bit of a mess."

Overall, on the strength of the first half I'd still give this book a 7 out of 10 with the caveat that the rest of the series improves upon the foundation it set.
Posted by Unknown at 11:30 PM