Like a lot of books that I pick up these days, God's War by Kameron Hurley is a book that I had seen come up on numerous book blogs and review websites. She received some awards for things like "best new author" or "best debut book", and was shortlisted for more major literary awards like the Nebula and the Locus.

Despite that this was a book that I constantly forgot about and so never got around to reading until recently. Maybe because it's sci-fi and I tend to prefer fantasy, or maybe it's because the bookstore I worked at never really had the book until recently. In fact, the first time I saw the book in the store was earlier this week, and I bought it straight away.


Short And Sweet. And By Sweet I Mean Coarse. 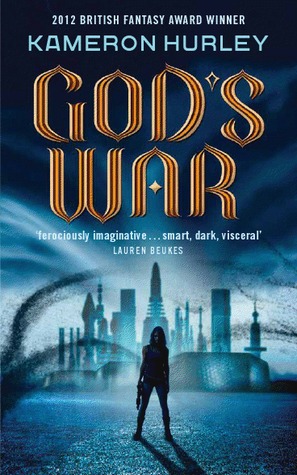 The world in which this story takes place is not Earth. That's never explicitly said, but implied heavily enough that the reader would figure it out pretty quickly. It isn't, however, ever explained where this planet is or what the history of its colonization is. Other planets are mentioned, you're told that colonists from off-world were cut off centuries before, and there are a few 'alien' humans who visit that become sort of important to the main plot. But that's it, this book doesn't have any real info dumps or asides to explain the history of something, or how something works. Some things are implied, and the rest you just pick up as you go along.

Quite frankly, I really liked the way Kameron Hurley pulled it off. It kept the book shorter (only 288 pages) and the pace moving along briskly, even when she had to put various pieces for the plot in place before moving along. In fact Hurley's entire writing style can be described as very spartan: she describes people, places, things, and events as concisely as possible.
And oh what a world.

It seems like the planet was populated by Islamic, or Islamic-like, colonists. Though there were different ethnic groups, factions, and sects that developed into distinct regional-political entities, they all worked together despite any tensions that might have existed between then. Eventually, however, a religious war erupted between two of the larger kingdoms that has lasted three hundred years. As a result, almost all men are legally required to fight in the war (and women can volunteer to serve), and this has a profound effect on the society of both kingdoms. The Nasheen (which is the main setting for the book) men are extremely rare, and so women govern the kingdom through various groups: the monarchy, the Bel Dame Council, and the Magicians. The other is more like a very orthodox Islamic state: men retain more power, because they're more rare, and stick to their religious principles more devoutly.

'Magic' in this world has two forms: bug-users and shifters. Both have mysterious origins, and a few times it's implied that the harsh environment of the planet is what caused people on the planet to wield both abilities - the 'aliens' that visit mention that people on planets they know of do not have them. The bug-users, simply called 'Magicians', are much more significant in this book. Basically, they can manipulate all the bugs of the planet. They can use them to attack (swarms of poisonous wasps), send communications long distance, they work them into the machinery as parts and fuel, and most importantly they use them to heal people... even people who are dead. The bugs cure the cancers that everyone gets, they reconstitute people who were set on fire, had their head blasted half-off by a shotgun, or had various limbs lopped or blasted off.

All for a price, of course.

Despite this curative technology/magic, people don't live very long. The world is harsh, apparently full of lots of radiation poisons and cancers from the burning sun(s). You need to be inoculated at birth with magic/technology, for a fee of course, or you'll be physically underdeveloped and weak and would be lucky to live into your 20's. As a result of this short life span, it is a prominent job for a woman to just churn out babies. They have them in bunches, aided by magic/science. Even so, by age 12-13 it seems you're basically an adult, and turning 30 seems to be the equivalent of being in your 50's or even 60's in real life. By law, anyone drafted into the war has to serve until they're 40 years old, so it's very rare for anyone to survive that long. Enemies are vaporized by bombs, burnt into ash by fire, cut up into tons of pieces, and contaminated by poisons and radioactive bugs in order to prevent them from being reconstituted. So unsurprisingly, a lot of young men try and dodge the draft or flee from the front.

This is where the bel dames, and as a result our heroine, comes into the picture.

The main character is Nyx, a woman who volunteered to serve at the war front for a couple of years, and since became a bel dame - a group of women who hunt down and kill anyone who tries to draft dodge or escape from the front. On the side, she works as a bounty hunter. This is something VERY frowned upon for a bel dame to do. Bel dame's are noble and crucial to victory, and dabbling in bounty hunting and working with gene pirates (yes it's apparently a thing) is thought to sabotage the war effort.

On the first page of this book Nyx sells her womb off to gene pirates as a spare body part to avoid being tracked by her sister bel dames, she gets drunk and high on whisky and morphine chasers, she loses all the money she made selling her womb betting on an underground boxing match, then goes home and sleeps with the woman who lost the boxing match. And she did it all to bring in a mark - the boxer's brother.

Nyx is coarse, she's an addict and a drunk, she's a rogue in her own society, she's an atheist among fierce religious groups, she has sex with men and woman for both pleasure and business, and she cut off the wang of the man who introduced her to the bounty hunting business. She's also a badass, she's a survivor, a fierce and dirty fighter, loyal to her fellow bounty hunting crew (though she doesn't always allow herself to show it), and less cynical and selfish than she lets on.

It's fast paced, it's interesting and refreshing, the characters are compelling, the plot has various interconnected twists, and overall it was a great foundation for the rest of the trilogy. I easily give it an 8 out of 10, maybe an 8.5.
Posted by Unknown at 8:22 PM