So I work at a bookstore, and the first thing I do every shift is wander through the Fantasy section to see if anything new came in. I look mostly for new series, as the second thing I do is check on our computers to see if there are any pre-orders/release dates for books in series I like so I already know if any of them would be on the shelf or not.

This year hasn't been all that great for established series having new installments coming out. Actually that's a lie, there were as many sequels/new installments from established authors and series as there were new series. I'm just bitter that neither the new Stormlight Archive nor the new Kingkiller Chronicler books came out, as they're by far and away my two favourite fantasy series—finished or ongoing.

The point I'd like to make is that it's been a fantastic year for surprising new finds when I've been perusing the fantasy shelves.


The Cream of the Crop


The Thousand Names by Django Wexler 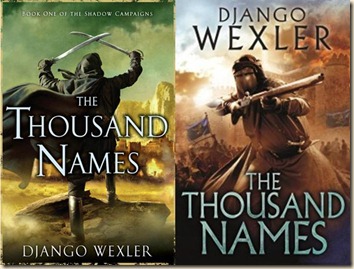 Of the three that I truly loved, I think that this is my favourite... although it's close. It had just about everything that I look for in a good fantasy book: good characters, be it heroes or villains or anyone who falls in the middle; a good plot, with both surprising and interesting twists and developments; good pacing, it never felt really rushed or really slowed; an interesting world, a refreshing change of pace from the usual Medieval, Western European inspired backdrop.

I loved Winter, the female soldier pretending to be a man so she could run away from her troubled past. I loved that the heroes weren't perfect or even otherworldly in their knowledge and powers, they were capable of both brilliance and naivety and/or stupidity. I loved the storyline that was reminiscent, but still original enough from, the Chain of Dogs story line in Stephen Erikson's Deadhouse Gates. I loved the battle scenes, with the Victorian-esque musket and gunpowder combat. The tension of awaiting a charge was built superbly, along with the shock of the erupting muskets and cannons. 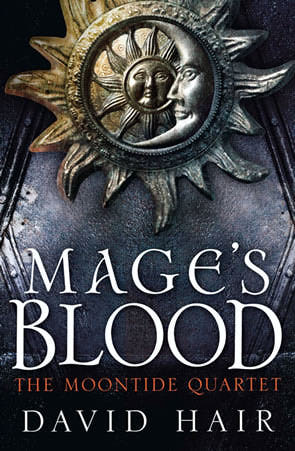 To me, this is the series that A Song of Ice and Fire should have been. (Aside: I'll have to write a post about my complaints regarding Mr George R.R. Martin's landmark series, but I shan't do it here).


It has intrigue and politicking in abundance, it has massive wars and conflicts, it has several different factions, groups, cultures, it has betrayal and bloodshed, it has seemingly important characters dying/being killed off. However, where Game of Thrones became bloated with unnecessary new characters, back stories, and world building that have become both uninteresting and even repetitious, David Hair's Moontide Quartet series feels so much more focused. It has a lot of POVs, and a lot of characters. Yet the characters are all so diverse in their personality, their backstory/background, their motivations, and yet all are interesting in their own way and to some extent. Yet, somehow, none of them feel all that cliché.

Best of all, that holds true for female characters as well as it does for the male ones. There isn't the typical "strong female character" that's basically just a badass man with breasts slapped on him. They're young and old, good and evil, intelligent and dim, naive and worldly, beautiful and ugly, stubborn and meek, and most importantly of all... flawed and real. They're not all damsels in distress, they're real people. One of the best story lines follows Elena, a female mage-soldier-bodyguard, and the young foreign princess/Queen Regent that she protects. The relationship between the two of them was great to see unfold.

Of the three, this is probably the more "traditional". It has the young hero, from noble (yet also common) blood, who is a warrior protege that also has a mysterious magical power within him. Yet for all the seemingly trope-y foundation that the book seems to be based on, it is still refreshing and original enough in its execution.

The narrative structure is similar to that of Name of the Wind by Patrick Rothfuss: the protagonist, already famous for his deeds despite being a young adult, tells his life's story to a scribe for recording. However, where Rothfuss' used first person narrative for the parts where Kvothe is telling his story, Vaelin's is in the third person. And as you find out, what you read in those parts isn't precisely what he is telling the scribe.

The other difference is that where Kvothe is a musician, a rogue, a student-scholar in a "University" and a magician, Vaelin is a warrior first and foremost. His schooling is at a religious-military order, and he is given over at a very young age to be trained as a soldier and a leader. His supporting cast of fellow students, and his love interest, again fall into the "familiar yet new" place that seems to define the book as a whole. It was just so well written that it didn't have to be as innovative or original as the other two mentioned above.

And the Bronze Medal(s) Goes To...


Promise of Blood by Brian McClellan The third of the "Blood" titles to be released this year, and the second that has muskets and gunpowder.

Brian McClellan was a student of Brandon Sanderson's writing class in Utah, and you can see some of his style and influence in this debut book. That's not a knock on him either. It has a unique magic system, an intriguing world, and a slew of compelling characters. Teacher would be proud!

And of course there are Gods, there are revolutions, there are epic battles and mysteries being investigated... all of which are, of course, interconnected with each other as far as the plot goes. I was tempted to group this with the other three above, but I think I might have to wait for the second book to confirm its status in my heart. Thankfully, Mr McClellan also seems to have learned the art of quick and productive writing from Professor Sanderson as well, rather than the University of Rothfuss or Martin Community College. 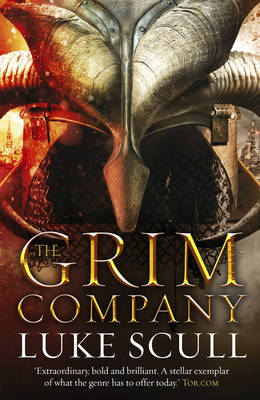 First, I'd like to note how annoyed I am that the cover *I* bought is lame as hell and I hate it. This one, while not great, is much better in my books

Anyways, this book has Mage Kings who slew the Gods themselves, fighting among each other for the raw magical resources that are dwindling from the world. Meanwhile a group dedicated to the assassination of these Mage Kings meets with a pair of barbarian warriors, one of whom is a weary and aged man with a noble code of honour and a big ass sword and fleeing the king he turned is back on after years of dedicated service. So... pretty much Logen Ninefingers from Joe Abercrombie's books, except he doesn't go bat-shit-crazy berserk in battle, and is more sympathetic as a character as a result.

A solid if not spectacular debut, one that hinted at all kinds of intriguing potential in the future. For now, a poor man's Joe Abercrombie.

Herald of the Storm by Richard Ford 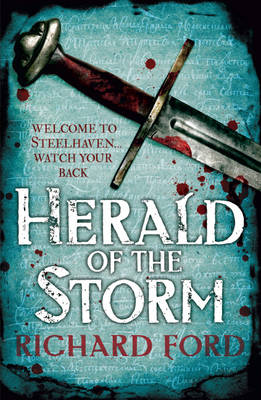 Similar to Mage's Blood in that it has lots of POVs, but is a shorter novel and far less ambitious in scope as a result. It takes place in a single city on the verge of all sorts of conflicts: invasion by a barbarian horde led by an otherworldly and mysterious prince, internal strife among the court, the thieve's guild causing misery among the slums and refugees, and other distinct groups with their own interests at heart.

The characters also feel much more clichéd and trope-y, but retain enough originality and charisma to hold my interest. Just like with The Grim Company, there was a lot of potential hinted at, as far as world building and plot/character development goes, but the potential wasn't seized upon enough for me to consider this at the same level as the "Cream of the Crop" mentioned above.
Posted by Unknown at 1:55 AM