Review: The Way Of Kings by Brandon Sanderson

When I first read The Way Of Kings, I had only recently discovered Brandon Sanderson as an author. I was a fan of the Wheel of Time series, and after Robert Jordan passed away before its completion Mr Sanderson was announced as the author who would finish it. Soon after, I was due to attend Comic Con in San Diego, and saw that Brandon Sanderson would be on a panel and book signing. I bought Mistborn: The Final Empire to read over the weekend. I finished reading it by the time my flight landed in San Diego and I reached to the hotel we were staying at, and that night ordered all three Mistborn books in hardcover.

A couple of months later, The Way Of Kings came out. A friend at work, who worked in the back receiving merchandise and knew I was really looking forward to Sanderson's new book, let me know the minute we received it. We got them two weeks before the official release date, and since it wasn't a strict on sale book I could buy it right away. I wound up reading it twice before other friends in different parts of the world even had a chance to buy it.

Along with Patrick Rothfuss' Kingkiller Chronicles, Stormlight Archive (of which The Way Of Kings is the first book) is my favourite fantasy series.


The Catch: Kaladin Stormblessed And A Whole New World

I recently wrote an article on what I called "The Catch", which is a name I give to the element(s) in a book that make me hooked into reading it through entirely.

One of the first things you notice when reading this book is that Brandon Sanderson crafted a refreshingly original fantasy world. It has newly conceived animals, humanoid races, landscapes, plants, supernatural weather patterns, currency/money, religions, cultures, kingdoms/nations, magic, technology, and world history/mythology. It would take a very lengthy post in and of itself just to try and describe all the ways that the world in The Way Of Kings is different and unique. You can tell that Sanderson put a lot of time, work and thought into creating it, because there's so much depth and content to it. Not only that, but the characters and the plot are obviously affected by the world.

The other thing that I noticed very quickly is that I loved the characters. Specifically, I knew I would love Kaladin Stormblessed before he had his own POV chapter. I love heroic characters, and Kaladin very quickly established that he doesn't fit into the traps and tropes a lot of heroes do. He is not perfect or infallible, and has his flaws, the hallmark features of great characters with lots of depth to them. He seems to suffer from depression, and is constantly at war with himself. Rough experiences in his life has made him cynical, to the point where he constantly asks himself "what's the point?". There are times he gives up trying to help anyone, and in the end the primary reason why he comes out of those dark moods is that he comes to hate himself for not caring.

But when he commits to being heroic and principled, the man is an absolute, unstoppable tank. I absolutely love heroes who manage to win people over to their side, even those who hitherto expressed dislike for the hero. I love it even more when they do so with simple yet powerful gestures and deeds, done out of the goodness of their heart rather than anything manipulative. By the end of the book, Kaladin has a small band of ultra-loyal followers whose hearts he won over using hearty stew, first-aid, and putting himself in harms way so they don't have to. What further makes Kaladin amazing as a character is the absolutely hellish journey he takes through the book. In the prologue, he's a warband leader and a warrior. In his first chapter, he's a slave. After a few chapters, he's worse than a slave... he's a bridgeman. You'll have to read the book to find out what that means, but I can tell you that it's both horrific and awesome.

I will say quickly that Kaladin is only 1/4 of the main POV characters in this book. The others are no slouches either. Dalinar and his son Adolin are Shardbearers (more on them below) and nobles in the most powerful kingdom in the world. They are noble in more than just title, but struggle with the intrigue and opulent behaviour of their peers while they wage a war against the "barbaric" humanoid people that assassinated their king. Finally, there's Shallan. A young and obscure noblewoman from a different kingdom, trying to save her family by becoming a student-ward of a brilliant and controversial scholar. She's a self-conscious, shy bookworm, so I adored her for obvious self-reflective reasons.

Now, the webcomic Penny Arcade recently drew up a comic that pokes fun at Sanderson fans and their penchant to praise his magic systems and world building. I got a really good laugh at it, because it's true. But... it's still true, because those are Sanderson's two of his greatest strengths as a fantasy author.

Speaking Of The Magic...

Seriously, I was really impressed with the magic system. There weren't old wizards throwing fireballs and conjuring demonic monsters. Instead, there are supernatural storms containing and compelled by some magical force, which can be infused within special gemstones. The energy they contain is called Stormlight, and the gemstones are used both as currency and to power the ultra powerful Shardblades and Shardplates. The Shardblades are the weapons that are summoned from thin air by its wielder, and can cut through anything like a hot knife through butter. Shardplate is near impenetrable armor that even a Shardblade can't break through without a flurry of solid blows. Even if the armor is broken into a million pieces, it can be completely regrown using enough Stormlight gems. Those wielding both a Shardblade and Shardplate can almost single handedly wipe out an opposing army. The history behind these Shards is only touched on and hinted at in the first book, but is obviously of great importance.

Oh right, and some special people can breathe in the Stormlight and become as powerful as someone who wields both a Shardblade and Shardplate. They become stronger, faster, and more skilled at everything they do. They can walk on walls and rooftops, they can pull objects towards a spot that they infuse with Stormlight, and bind things together through a similar process. It turns Kaladin, a formidable warrior in his own right, into a one man army on par with a Shardbearer. In fact, he kills one Shardbearer and seriously wounds another using nothing but Stormlight and his own skill.

One other thing Sanderson has established is really good plots. The reason for that, at least in my mind, is that his magic, characters, world and plots are all intertwined. They all feed off and tie in to each other in a manner that always seems logical because of the rules and mannerisms that he establishes for each aspect. 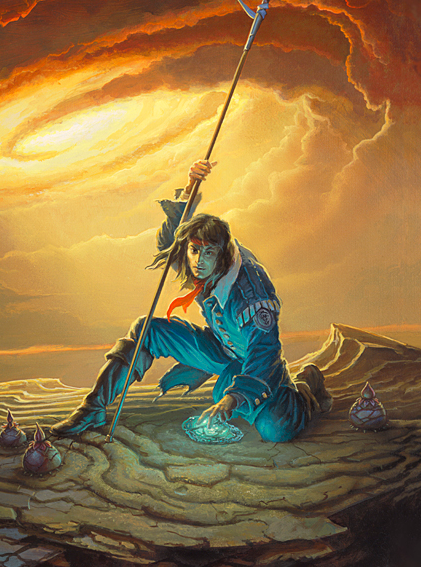 In this world, humanity faces a cataclysmic war of extinction called Desolations every few thousand years. Semi-divine figures called the Heralds arrive to lead humanity against the Voidbringers. At the start of the book, you don't know who or what the Voidbringers are or what their motivations or goals are, despite what the predominant religion in the world proclaims. By the end of the book we are told what they are... but I have my doubts that it will turn out to be true. It seems too convenient. And that's what Sanderson does so well with his plot: with the plot intertwined with the history and lore of the world he feeds throughout the book, every bit of worldbuilding he throws at us isn't just cool... it's important!

He is also very good at dropping subtle hints and foreshadowing that seem innocuous at the time, but wind up being very significant for his plot twists. He established that in all of hisbooks that preceded The Way of Kings, and as a result when I read (and re-read, and re-read again) through this book I paid extra attention to any word or phrasing that seemed out of place, or oddly significant. It's like a puzzle, trying to fit together the pieces I gathered, sifting through what I think will wind up being important and what won't be, trying to guess at what bombshells he'll drop on us in the future. I am rather proud of myself in that I think I picked out a couple of nuggets and can guess at their significance, which of course means I'll be completely wrong.

This book is fantastic. Seriously, inarguably fantastic as far as I'm concerned. I give it a 10/10. I don't mean that it's flawless or perfect, because there's no such thing. But since there's no such thing, I give it a perfect score because to me it's as good a book as is possible to craft. There is so much about this book that I didn't even mention, or just barely touched on, but this review is already getting long. You'll just have to find out about it all yourself.

If you like fantasy, even just a little bit, this book is a must-read.
Posted by Unknown at 2:14 AM