What? Who said I was whoring myself out for page hits by creating a list of my favourite fantasy series? Lies and slander, I say!

Now excuse me while I whore myself out for page hits by creating a list of my favourite fantasy series.

Lord of the Rings by God

Lord of the Rings will not be included in this list, because it's not fair. I don't even mean that in the sense that "Well it was the very first modern fantasy book, it established the genre". I mean, specifically for me, Lord of the Rings might as well be the Bible.

First, as you may have noticed by now I love books. Like... I really, REALLY like books. Especially fantasy books. And as I already mentioned Lord of the Rings and the Hobbit are kind of Genesis.

Second, I also happen to love Celtic, Anglo-Saxon, and Norse history, culture, mythology and folklore. I majored in Celtic Studies in university, and applied to grad schools for it as well. The only reason why I didn't major in Anglo-Saxon and/or Norse studies is my university didn't have majors for them. I loved those studies almost as much as I loved fantasy books, which only makes sense since Tolkien drew a lot of inspiration from those historical cultures and mythologies. Speaking of which, guess who was actually a fairly prominent scholar in Celtic, Anglo-Saxon, and Norse linguistics, folklore, and mythology? Yeah, that Tolkien guy. I actually read some of his scholarly work for some of my essays.

So when I list above that Lord of the Rings is by "God", I'm mostly being tongue-in-cheek. But not entirely. And quite frankly, the mere mortals below on this list cannot hope to compete with God. It just wouldn't be fair.

In truth I'd say this series is tied with the Stormlight Archive, below. Love the prose, love the protagonist, love the magic and the adventures and the shenanigans.

I think the only reason why I would say it's not tied with Rothfuss' series, is that there's only been one book so far. We'll see if I change my mind after reading Words of Radiance. Kaladin and the Bridgemen is one of the most unique and incredible plot arcs I've ever read in any book, ever.

#3 The Shadow Campaigns by Django Wexler

I loved the characters, I loved the setting, I loved the plot, and I loved the battles. I can't really find any fault with it, except to say I didn't like it as much as the above too... but not by much.

#4 The Moontide Quartet by David Hair

Honestly, the second book might  have forced me to put it in with a tie with the above. It's massive but focused, every character POV is interesting and none of them seem cliché, the magic and world is great.

Loved the magic, loved the world, loved the characters, loved the plot twists, and loved the ending of the series. The second and most of the third book didn't have the same magic as The Final Empire did, which keeps it from being up top with Sanderson's other series.

Characters are good, world is great, plot is somewhere between good and great, the cliffhanger (literally) at the end of Daylight War made me extremely angry... which I can appreciate is a sign that it did its job well.

Has probably my favourite character in any book I've read: Inquisitor Glotka. Twisted in body and mind, the internal monologues he has with himself are grim and hilarious.

#8 The Broken Empire by Mark Lawrence

Has one of my other favourite characters, this one is the main (indeed only) protagonist. It can be seriously twisted, but almost always mixes those moments with humour as if to dare you to find it funny. I always did... probably doesn't speak well for me. 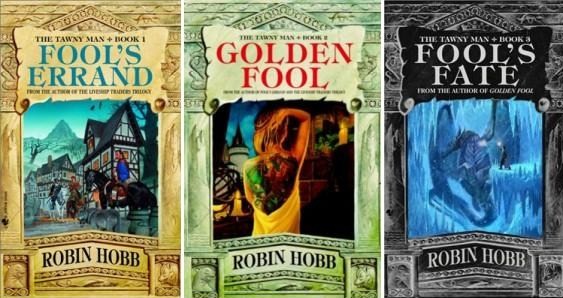 The internal struggles the protagonist in these trilogies has (it's the same character, which is why I grouped them together), hit me really close to home. I don't know if Mrs Hobb meant for Fitz to come off as suffering depression, but it certainly resonated with that part of myself.

One of the most beautifully written books I've read, as far as both the prose itself and the world it manages to paint. It helps overcome a just "okay" caste of characters, in my books at least.

#11 The Gentleman Bastard by Scott Lynch

Great dialogues between the main characters, great plots and capers, mostly great characters. I have yet to read the third book, which I've read and been told is a bit disappointing. I almost expect that, having heard that, my bar will be set lower and I'll wind up enjoying it more than I would have otherwise.

#12 A Raven's Shadow by Anthony Ryan

Just a well written, well executed book. Love the main character and his journey in life, love the direction it took. Its biggest weakness is that it seemed to take a while to get there, even though I understand that I could only really appreciate it as much as I did because Ryan spent so much time setting the stage for it.

#13 Malazan Book of the Fallen by Stephen Erikson

Massive series, incredibly massive world(s). This series defines the word "epic". There is more mythology and world building in this series than every other series on this list combined (excluding Lord of the Rings, because God).

Love the siege warfare, love the dialogue between characters, love most of the characters themselves. The constant jumping of POVs was a bit irksome at a few points, and the magic system doesn't seem to have the depth of others.

Love the magic, the world, the characters, and the plot twists. The first book spent far too much time constantly explaining how the magic system worked, but the second made up for it by dropping those explanations entirely and concentrating on the amazingly surprising plot twists.

#16 The Dagger and the Coin by Daniel Abraham

Well written, has the most sympathetic and psychopathic, genocidal villain in any books I've read. Some things seem too superficial at times, or just a bit plain/uninteresting. But that seems to have changed by the end of book three.

#17 Wheel of Time by Robert Jordan

One of the first landmark fantasy series after Lord of the Rings. The first 5-6 books were really good, the next 2-3 were good to okay, books 8-11 were bloated and awful, and Sanderson's writing of the final three books recaptured the magic from the first half of the series. The characters were repetitive and incredibly annoying at times, while a select few were fantastic. The magic was cool, the world and the battles were too. It all balances out as a good series overall.

Love the magic, love the world, love the characters and their development. Some parts of the plot were either a bit obvious or kinda silly.

The first book (which is only half of the first omnibus in the picture above) was very cliché fantasy, but the dialogue between the two protagonists made me keep going. I'm glad I did, as each book improved upon the last. The ending gave me goosebumps, and my jaw literally dropped. It is without a doubt the best ending to a series I've ever read.


#20 Sword of Truth by Terry Goodkind

This series is very divisive to me. Books 1, 2, 6, 9 and 11 were all great. Books 7 and 8 seemed utterly pointless to the rest of the series, and seemed to only serve the purpose that Goodkind could pontificate on his philosophies. Goodkind himself really soured his reputation, at least for me, by seemingly deriding fantasy fans in general and snubbing his own fans at times. However, his official forum was where I became an admin, and I became so close with some of them that we all went to Comic Con together one year. These were the people I met, and these were the books I read and loved, during the worst year in my life as far as personal loss and depression goes. For these reasons they still hold a place in my heart.

Very unique magic system, and unusual (in a good way) plot arc over the whole series. Not much real drama though, when it seems there could and maybe even should have been.

#22 The Left Hand of God by Paul Hoffman

I wrote a review about this series in my previous post, which neatly outlined in more detail why I both love and hate this series.

The blog entry before THAT was a review of THIS series, which again outlined what I loved and hated about this series.

It's a mystery, which I also like as a genre, mixed with fantasy. What's not to like about it? Nothing, even if there also really isn't anything to love about it.

#25 The Lotus War by Jay Kristoff

An overall good series. That is both the best and most damning thing I can say about series.

#27 The Grim Company by Luke Scull

What I said about the above series is equally true about this one.

Unique and original magic and world, some incredibly annoying characters at times.


#30 The Belgariad by David Eddings

Another classic fantasy series, more appropriate for young adults than adults. Unfortunately, I read it as an adult and so I couldn't really form that emotional attachment to it than if I had read it as a young teenager.

Pretty unique magic system, good plot, decent characters. Kind of superficial, in that there didn't seem to be much depth. I'm not sure if this series will ever actually continue, as the author seems to have fallen off the map.

#32 The Wild Hunt by Elspeth Cooper

Lots of clichés and not much depth. Well written, though not fantastic. Still enjoyed it, but not one I'm sure I'd recommend to others unless I knew them well enough to know it was up their alley.
Posted by Unknown at 1:36 AM