Warning: This review will contain mild spoilers. I will strive to avoid giving anything major away, while trying to give someone who hasn't read the book the best impression I can. 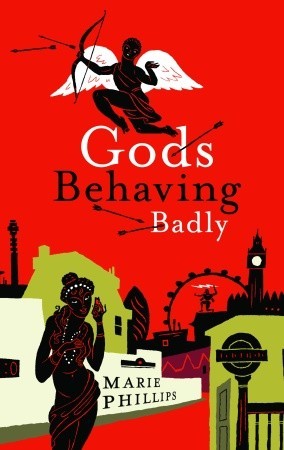 Gods Behaving Badly by Marie Phillips will be the first non-fantasy book I've reviewed. It is categorized as a general fiction book, though it still has elements of the fantastic in it.


Gods of Olympus are alive, but crammed into a crumbling London townhouse, and, powers waning, unhappily employed. Artemis is a dog-walker, Apollo a TV psychic, Aphrodite a phone sex operator, and Dionysus a DJ. Aphrodite's quarrel with lover and nephew Apollo escalates into the end of the world. Humans Alice and Neil are caught in the crossfire.


"Ancient Greek Gods living in modern London?" I says to myself. "Sounds too good to be true, Brain must have gotten us drunk again."

"Twaddle-poop" my Brain shouts. "Hands, flip to page one and we'll see who's drunk!" After reading the first chapter, I'm glad I listened to Brain. The opening scene, with Artemis speaking with a tree that was actually a woman who spurned the sexual advances of Apollo, was the type of British humour that I love: utterly bizarre situations where everyone speaks properly and as if everything is normal.

It's not just that there are ancient gods living in the modern world, which itself has much promise either for awesomeness or hilarity. It's that the modern world is still entirely dependent on the efforts of those gods to fulfill their responsibilities. At the same time, their interactions with us mortal humans rather brilliantly reveals the alien and sometimes terrifyingly different mind set of the Greek Pantheon.

Basically, the Gods are real and they're actually in charge/control everything they are said to. Ares

causes/orchestrates all of the wars, Apollo ensures the sun rises and sets, Artemis can speak with animals and plants. But, as the synopsis says, their powers are not infinite. In fact, they're running out and so they're supposed to be conserving whatever they have left for their respective responsibilities.

Problem is, they have very human personality flaws, but since they're Gods those flaws are amplified. As a household, living in a London flat, they're all incredibly dysfunctional. Apollo, god of (among other things) the Sun and prophecy, is a sex-crazed megalomaniac who earns his living as a TV psychic. Aphrodite, goddess of love, beauty and procreation, is extremely shallow and petty and her job is on a sex-talk phone service. Artemis, goddess of hunting, animals and chastity, is very proper and stubborn and works as a dog walker.

These three Gods are the main actors from the Gods' side of the story: Aphrodite gets angry at Apollo for "being mean to her" and not using his power to warm up the water basin for her shower. The prank she devises is to make him fall in love with a mortal woman, but make it so she will hate and spurn him rather than return his desperate advances. The spiteful scheme inadvertently winds up threatening the end of the world, and all the while Artemis scrambles to keep the world in order.

Enter Alice and Neil. They're two mere mortals, both in love with each other in that incredibly awkward way where neither believes the other is at all interested that is just so adorable (as long as you're not one of them). Unfortunately for the two, they're the ones who get caught up in Aphrodite's scheming. Alice, mainly, is the one dragged into their world, with Neil doing his best to drag her back out of it. It winds up testing their budding relationship. Thankfully, Neil proves that he's willing to go to Hell itself to save Alice! And that's rather convenient, because the depth of their love could very well decide the fate of the world. Dun dun dunnnn...

I did say this book shares some elements of fantasy, and I wasn't just talking about the fact that Greek Gods are real in this tale. I'm willing to admit it if others won't: fantasy as a genre is pretty much the male equivalent of the romance genre. What guy wouldn't want to save his lady love from the underworld and save the world at the same time, to prove his love for her?

No one else? Just me? Thanks guys, way to make this awkward.

Very Much Of This World

This book has an intriguing concept, great comedy throughout the whole thing, and the charming romance between Alice and Neil, but doesn't really have anything else going for it. The book itself is pretty short, which is probably for the best. The main plot arc about the world possibly ending seems somewhat contrived, the ending worthy of a slight grin but not especially clever.

In the end, this book stuck to its strengths. It is brilliantly charming and amusing, and definitely worth the read. But it is very much something of a fluff novel. I really, really liked it. But I didn't love it, since it just didn't have the power or the depth to completely win me over.